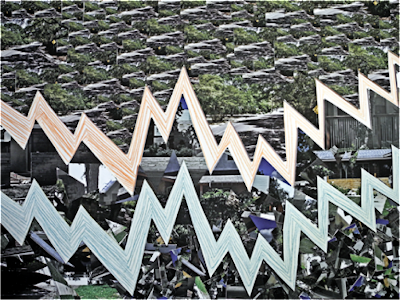 Most Austin neighborhoods have experienced incredible change over the last twelve and a half years. Whether one considers demographics, property values, or simply total population, Austin today is not the same place it was in 2000. Of course, change can be positive or negative or something in between. That being said, it’s important to consider how change is affecting the city’s culture.
Shoal Creek Boulevard can be divided into five sections between 38th Street and Foster Lane. Visually speaking, the sections are easily recognized by the shifts in lot size and architectural style. The same stretch can also be divided by US Census Tract. It falls into Census Tracts 2.04, 2.06, and 15.01. I will focus on the section of Shoal Creek Blvd. between 45th St. and Allandale Rd. My focus area is located within Tract 2.06. It makes up the southern end of the relatively affluent Allandale neighborhood. Based on my observations, the area is going through a period of renewal. While the area doesn’t seem to have ever entered a period of decline, it seems to be attracting new residents who are apt to make substantial changes to the existing properties. A surprising number of these new homeowners has embraced a desire to physically barricade their front yards from the public sidewalks and bike lanes that run parallel to their property.
A distinction needs to be made between a traditional picket fence and what’s being built in my focus area. It’s important to recognize that private property is private. Putting a fence in the front yard isn’t a new idea. Arguably, the picket fence is an archetypal feature of the classic American home. However, traditional picket fences are short and have an almost equal balance of filled and empty space. They separate private space from public space, but they allow interaction. Although they often block access to the walk leading to the front door, the message they convey feels negotiable and somewhat informal. The structures being built in my focus area are different. Typically, they are built of stone or concrete. Often, they are taller than a picket fence would be. In the instances they’ve been designed to limit access to the home’s front door, their message is absolute and intransigent. Rather than simply demarcating the boundary between private and public, their purpose is the “policing of social boundaries” (Davis 193).
Don Mitchell has written extensively about the privatization of public space. His notion of the “personal bubble of inviolable private property” is especially relevant to understanding the likely cause behind the desire to build physical barriers that is developing in my focus area (Mitchell 211). Specifically, it is the “right to be left alone” (Mitchell 216) that grew out of the right to an inviolable personal bubble that is particularly important. These ideas have sprouted from recently enacted laws that were designed to not only limit how people physically interact in public, but also to limit how people communicate in public. Arguably, the barriers being constructed on Shoal Creek Blvd. represent an embodiment of limiting public interaction. In this case, it’s the homeowner who’s defined the size of the inviolable bubble. The barriers ensure maximum individual space while simultaneously restricting to the public sidewalk space the possibility for community interaction. The barriers discourage anyone from approaching the property so that the homeowner can be left alone. In contrast to community models in which:
[p]eople are dealing with each other, willing to express themselves, rather than storing             up their grievances in private, where the character of their enemies and themselves             becomes black-and-white clear. Multiple points of contact with different elements in a             city diffuse hostility to the point where an individual will despair of defining some safe,             secure attributes of his own identity and social space, (Sennett 155-56)

what’s happening on Shoal Creek Blvd. looks to be the nascent stages of what Soja refers to as “carceral archipelagos” (376).
The trend is striking because it seems to run against the community values that one might expect to find in a neighborhood like my section of Allandale. The estimated median home value in 2011 (the most current data available) was $334,800 +/- $34,508 (American FactFinder). Based on my observations, residents seem to enjoy spending time outside, and they take advantage of the sidewalks and bike lanes. Local realtors focus on the fact that people who move to Allandale stay there (Reilly). With that in mind, perhaps my focus area is a self-contained anomaly. The trend hasn’t caught on with residents who live south of 45th St. or north of Allandale Rd.
The trend is also striking because my section of Allandale’s minority population shrank between 2000 and 2010. According to US Census data, in 2000, the white, one race only population was 84.3%. As of 2010, the white, one race only population was 89.3%. I should note that the comparison isn’t perfect. In 2000, my focus area was part of US Census Tract 2.01. In 2010, US Census Tract 2.01 became Tract 2.05 and 2.06. However, even if one combines the data from Tract 2.05 and 2.06 there was still a visible contraction in the number of minority residents between 2000 – 2010. In 2000 Tract 2.01 had 218 Black or African American Residents. By 2010, Tracts 2.05 and 2.06 had a combined population of only 196 Black or African American Residents, a roughly 10% decrease.
According to the Austin Police Department’s statistics, the incidence of crime in my focus area has been dropping. The department has published the number of incidents of murder, rape, robbery, aggravated assault, burglary, theft, motor vehicle theft, and arson for the years 2003 – 2011 by zip code. On average 1,270 offenses were committed per year in my focus area between 2003 – 2011. However, in 2011, there were only 1,164 combined incidents, lower than any other year for which data is available, and nearly 9% below the 9-year average.
One might argue that, contrary to a need to construct an impenetrable bubble, the people constructing these barriers have done so because they find them architecturally pleasing, they want to keep dogs off the lawn, or for some other benign reason. Based on my observations, I would argue against a benign motivation for two reasons. First, as I’ve suggested, building materials and techniques convey specific messages. At some point, the homeowners who’ve constructed these barriers decided to build a structure with a specific presence to convey a clear message. Second, based on my observations, the people who’ve constructed these barriers seem to have done so through their own initiative. As I’ve pointed out, between 2000 – 2011, not only did property values increase dramatically in my focus area, but the area also got less diverse and the crime rate went down. Generally speaking, these trends should’ve motivated residents to remove barriers from their yards.
Again, I must concede that my focus area may represent an anomalous trend. Based on the numbers, it’s occurred without residents taking into consideration property value, racial and ethnic demographics, or changes in the incidence of crime. There is something odd about the development of semi-walled proto-compounds within a neighborhood that still seems to be community oriented. Unfortunately, the very nature of the barriers made it difficult to contact residents directly to ask them about the intent of their barriers. After multiple visits to the area, I never once saw a property owner who lived in one of the houses with a front yard barrier. Whatever the motivation, the rise of built barriers is in line with both Davis’ and Mitchell’s observations of life in the postmodern city. The affluent have created impenetrable spaces to ensure maximum private freedom while simultaneously limiting any potential public discomfort.
Works Cited
American FactFinder. United States Census Bureau, U.S. Department of Commerce. Web. 7 Jul.             2013.
Austin Police Department. Crime Stats Listed by Zip Code. City of Austin. Web. 7 Jul. 2013.
Davis, Mike. “Excavating the Future in Los Angeles.” The Blackwell City Reader. Eds. Bridge,             Gary and Sophie Watson. 2nd ed. Malden, MA: Wiley-Blackwell, 2010. 193-200. Print.
Mitchell, Don. “The S.U.V. Model of Citizenship: Floating Bubbles, Buffer Zones, and the Rise of             the ‘Purely Atomic’ Individual”. The Blackwell City Reader. Eds. Bridge, Gary and Sophie             Watson. 2nd ed. Malden, MA: Wiley-Blackwell, 2010. 211-20. Print.
Reilly, Michael. Allandale Homes For Sale. Reilly Realtors, 2013. Web. 7 Jul. 2013
Sennett, Richard. The Uses of Disorder: Personal Identity and City Life. New York: Alfred A. Knopf
Inc., 1970. Print.
Soja, Edward W. “Six Discourses on the Postmetropolis.” The Blackwell City Reader. Eds. Bridge,             Gary and Sophie Watson. 2nd ed. Malden, MA: Wiley-Blackwell, 2010. 374-81. Print.
Posted by Robert Lemon at 1:51 PM