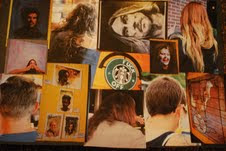 Collage: The Epoch Coffee House is a unique place in north campus, it attracts an eclectic group of people. The cafe features art pieces by local artists, they serve simple coffee, related drinks, and foodstuffs. The crowd encompasses everything from grungy, aging artists to yuppies and youthful, new-age hippies. In my collage I feature two things, the decor chosen by the operators of Epoch, and the hair styling chosen by the patrons of Epoch.